Tospaa CodeChallenge Multiplayer Coding Game is online!!! Tospaa has always liked to look at coding education from different angles. İm 2016 it started by designing computer-free unplugged coding tools for schools without computer labs and internet instead of digital tools. Tospaa unplugged coding game has been widely played in 2018 and 2019 at coding weeks. Now it’s time to sail to new seas 🙂

Since the launch of code.org in 2013, dozens of digital tools have been released. Unfortunately, most of these tools were focused on individual learning. Especially during the pandemic period, the confinement of children to their homes separated the children from each other. Social learning, co-learning, and peer learning have been deleted from learning environments.

That’s why Tospaa is here with a game that will bring children together again and encourage them to learn from each other. Tospaa CodeChallenge Multiplayer Coding Game, as we love it, “code challenge”, will not only bring the children in same country, maybe an Indian child will play with a French, a Canadian, a South African to write the best code. The Android version of the game will be released soon, the address of the web version is game.tospaa.org 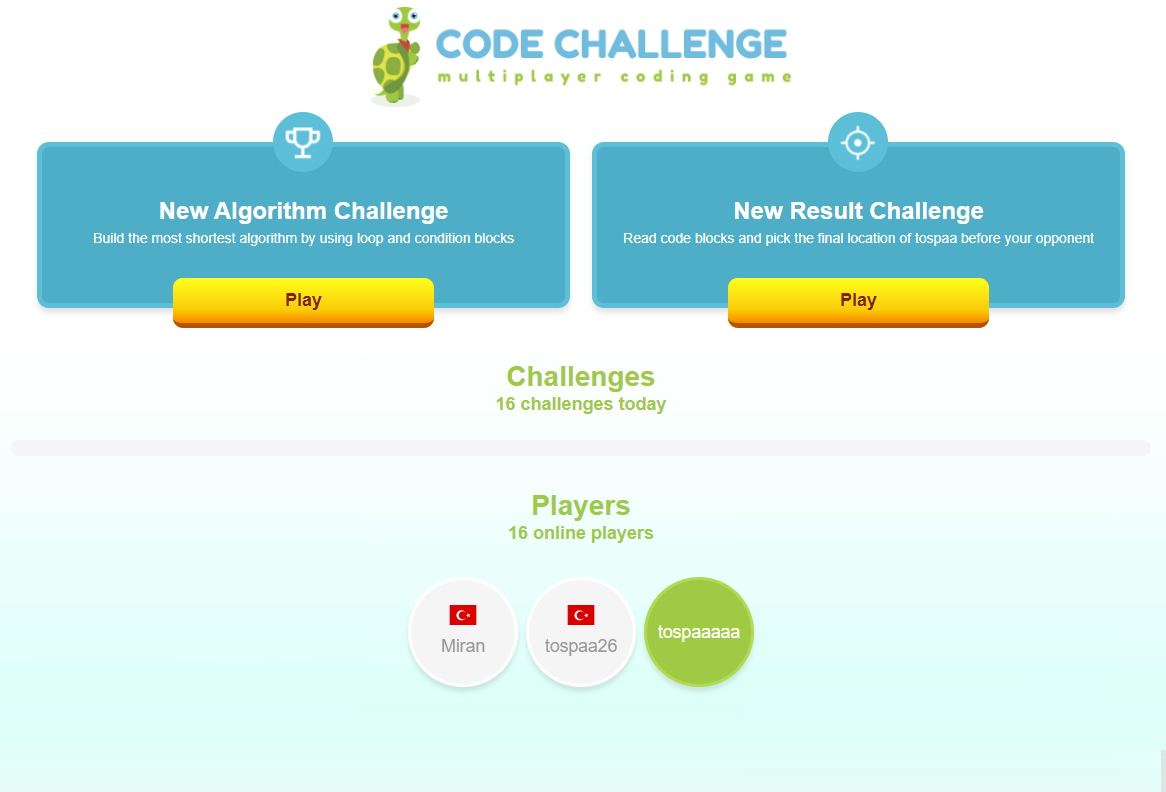 This site uses Akismet to reduce spam. Learn how your comment data is processed.

We use cookies on our website to give you the most relevant experience by remembering your preferences and repeat visits. By clicking “Got it!”, you consent to the use of ALL the cookies. For more information read our cookie policy
Got it
Manage consent

This website uses cookies to improve your experience while you navigate through the website. Out of these, the cookies that are categorized as necessary are stored on your browser as they are essential for the working of basic functionalities of the website. We also use third-party cookies that help us analyze and understand how you use this website. These cookies will be stored in your browser only with your consent. You also have the option to opt-out of these cookies. But opting out of some of these cookies may affect your browsing experience.
Necessary Always Enabled
Necessary cookies are absolutely essential for the website to function properly. These cookies ensure basic functionalities and security features of the website, anonymously.
Functional
Functional cookies help to perform certain functionalities like sharing the content of the website on social media platforms, collect feedbacks, and other third-party features.
Performance
Performance cookies are used to understand and analyze the key performance indexes of the website which helps in delivering a better user experience for the visitors.
Analytics
Analytical cookies are used to understand how visitors interact with the website. These cookies help provide information on metrics the number of visitors, bounce rate, traffic source, etc.
Advertisement
Advertisement cookies are used to provide visitors with relevant ads and marketing campaigns. These cookies track visitors across websites and collect information to provide customized ads.
Others
Other uncategorized cookies are those that are being analyzed and have not been classified into a category as yet.
SAVE & ACCEPT